Strategy and Creativity: Part I. 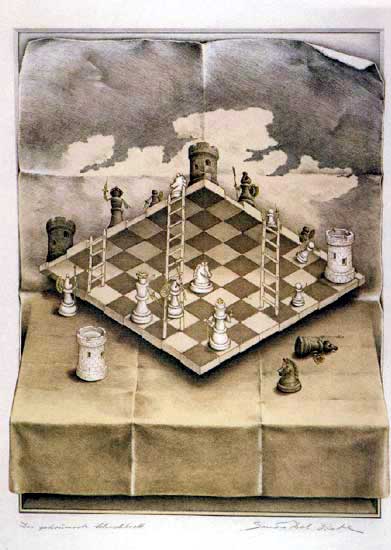 “War is more than a true chameleon that slightly adapts its characteristics to the given case. As a total phenomenon its dominant tendencies always make war a remarkable trinity–composed of primordial violence, hatred, and enmity, which are to be regarded as a blind natural force; of the play of chance and probability within which the creative spirit is free to roam; and of its element of subordination, as an instrument of policy, which makes it subject to reason alone.”
-Carl von Clausewitz, On War

“Thus the highest form of generalship is to balk the enemy’s plans; the next best is to prevent the junction of the enemy’s forces; the next in order is to attack the enemy’s army in the field; and the worst policy of all is to besiege walled cities….Therefore the skillful leader subdues the enemy’s troops without any fighting; he captures their cities without laying siege to them; he overthrows their kingdom without lengthy operations in the field. With his forces intact he will dispute the mastery of the Empire, and thus, without losing a man, his triumph will be complete. This is the method of attacking by stratagem.”
– Sun Tzu, The Art of War

This blog is read by many people with a deep interest in strategy coming from different philosophical and professional perspectives. While I have my own speculations  based on years of study, I would like to begin by first posing a few questions to the readership:

The floor is yours, strong argument is welcomed.