And now another (very short piece) for the South China Morning Post, this time looking at the implications to Russia of the opening up of Iran and what this means for the Silk Road Economic Belt vision.

Raffaello Pantucci says the â€˜One Belt, One Roadâ€™ trade initiative is likely to sideline Moscow and give Beijing the upper hand in their awkward relationship

President Xi Jinpingâ€™s ( ç¿’è¿‘å¹³ ) visit to Tehran â€“ the first by a foreign leader since the lifting of sanctions â€“ highlights the potential centrality of Iran to Chinaâ€™s broader regional foreign policy. The opening up of Iran, a country in which China has long maintained substantial interests, means Xiâ€™s â€œOne Belt, One Roadâ€ vision can now go cleanly across Eurasia without ever going through Russia. Moscow can be cut out. 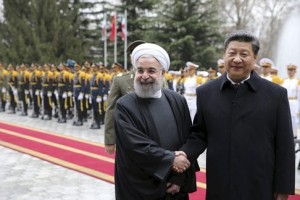 Visiting Tashkent, one can see the ancient routes laid out by the Timurid empire that constituted the ancient silk road. Rather than track through Russia, most would go below the Caspian and Black seas to reach Turkey and Europe. An iron silk road has been established that will track the old silk routes

Soon after Xi visited Tehran, a train laden with goods left Yiwu, Zhejiang province (æµ™æ±Ÿ), headed to Tehran following this route. On February 10, it crossed the border from Turkmenistan and arrived in Iran this week. The Ukrainian minister of infrastructure announced at the same time that, by the end of the month, a direct rail line would open between Ukraine and China, cutting across Georgia, Azerbaijan, the Caspian Sea and Kazakhstan. An iron silk road has been established that will track the old silk routes.

The first Chinese cargo train arrives in Tehran after passing through Kazakhstan and Turkmenistan. Photo: EPA

Moscow has long been an awkward partner for Beijing and the question of how Russia fits into the belt and road vision was always unclear. Some incorrectly saw the Eurasian Economic Union as an effort by Moscow to push back on Chinaâ€™s dominance in Central Asia. This misinterprets both powersâ€™ interests: Moscow is aiming to recreate a former space of control, while China is building trade corridors. For China, the existence of a common economic space with a single tariff barrier from its borders to the edges of Europe is a benefit to trade. 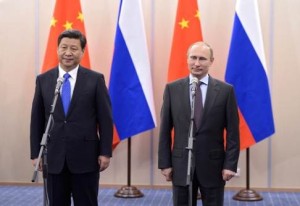 The reality is that cutting a path across Russia is a long rail route that is only going to be attractive to high-value small objects which are still fairly limited in production volume in Xinjiang â€“ and can now instead go along the route to Ukraine. Mass-produced, high-volume goods for which China is famous are much better placed going by sea to Europe. Unless, that is, the ultimate market is in the heart of the Eurasian continent. And this is where the route across Iran is interesting â€“ connecting Chinaâ€™s markets directly to the bustling bazaars of the Middle East.

In paving an iron silk road, China is gradually reducing Moscowâ€™s importance. This will further strengthen Beijingâ€™s hand in their bilateral relationship and reduce Russiaâ€™s power on the international stage. Isolated by the West and increasingly sidelined by China, Moscowâ€™s decline will only be highlighted by the opening of these new routes across Eurasia.