The Cockroaches of War. And of Jihad 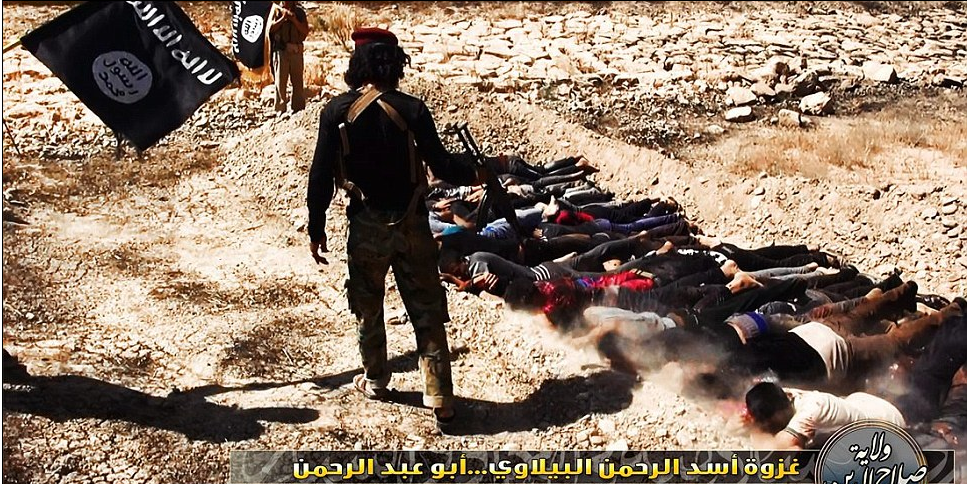 John Robb had a cool post on the ultra-radical takfiri insurgency ISIS/ISIL and their self-proclaimed Sunni “Caliphate“, the Islamic State, whom he gave as an example of “the cockroaches of war”:

ISIS is a marketplace — a freewheeling bazaar of violence – and it is rapidly expanding.

So far, it’s been very successful:

This success is due to the fact that ISIS isn’t trying to build a “state.”  It’s not a government.

….This bazaar was built for one purpose:  perpetual expansion and continuous warfare.

Participation is open to everyone willing to live under Sharia and able to expand the bazaar to new areas.

The strategies and tactics ISIS uses are open sourced.  Any group or individual can advance them, as long as they can demonstrate they work.

Weapons and other technologies needed for war are developed, shared and sold between participants and the pace of development based on previous examples is very quick.

ISIS recently captured a town in Lebanon and Iraq’s largest dam, adding to the dams they already control in Syria. More importantly, ISIS fighters outsmarted a Kurdish Peshmerga equivalent of a battalion, using artillery and snipers, to force the Kurds to withdraw from the town of Sinjar where they have begun persecuting the Yezidi minority. This is significant as the fearsome Peshmerga are no pushovers. To put this in perspective, this was a military feat by ISIS that Saddam’s vaunted Republican Guard had great difficulty accomplishing without air support. It also reveals the Kurds may have some deficiencies with their logistics and operational level leadership (allegedly, the Peshmerga ran out of ammunition).

Absurd mummery about “Caliph Ibrahim” aside, as a fighting force and religious-political movement, ISIS has momentum and possesses the initiative. Despite their flamboyant cruelty, ISIS is attracting jihadis to a broken Iraq the way disaffected and radicalized German ex-soldiers swarmed into Freikorps units after the Great War. Reportedly, more British citizens have signed up with ISIS this year than have joined Britain’s territorial Army. Part of the reason is that ISIS, despite its obvious extremism and malevolence, is fighting successfully at the moral and mental levels of war and not merely the physical.

The strategist Colonel John Boyd described the purpose of fighting at the moral level of war as follows:

Create, exploit, and magnify
• Menace:
Impressions of danger to one’s well
being and survival.

• Mistrust:
Atmosphere of doubt and suspicion
that loosens human bonds among
members of an organic whole or
between organic wholes.

alienation in order to generate

many non-cooperative centers of
gravity, as well as subvert those
that adversary depends upon,
thereby magnify internal friction.

Destroy moral bonds
that permit an organic
whole to exist

To be a politically attractive force at the grand strategic level while doing morally reprehensible  things at the tactical level on a regular basis is no small strategic feat. Not a unique or impossible one though; both the Nazis and especially the Communists were able to continue to attract credulous Western supporters despite voluminous evidence of crimes against humanity and genocide (Communism still has western apologists in the media and academia). ISIS uses extreme violence but does so strategically with a vision of Caliphate to – 1)  to split Iraqi society into Sunnis vs. everyone else and split Sunnis into those who support ISIS and those who are “apostates” like the Shia, and are deserving of death; and 2) to destroy the Western concept of nation-states, replacing Iraq, Syria, Lebanon with a borderless Caliphate to rule over the Ummah.

The ISIS message is simultaneously highly exclusive (extreme Salafi version of Sharia) as well as wholly universal. This – along with identifying the Shia as the enemy force -allows ISIS to fold in a large array of disaffected, angry, rival Iraqi Sunni factions under the aegis of their movement while still attracting a global swarm of jihadi volunteers.  Compare this with the self-isolating messaging and behavior of HAMAS who, despite fighting the “Zionist enemy” Israel, are thoroughly despised in the region by most of their natural Arab state allies, the Palestinian Authority and even the radical jihadi groups. Nor is HAMAS able to escape moral damage from committing war crimes in the eyes of the international community the way ISIS escapes harm from committing worse ones ( Not only do they escape moral costs, ISIS flips their atrocities into a net positive by terrorizing the potential opposition and looking self-confidently defiant of world opinion in Islamist eyes).

In ISIS, Global Guerrilla strategy is fusing with the penultimate radical jihadi ideology.