Pete Turner of The Break it Down Show had a powerful post that encapsulated what is wrong with the American approach to intervention in foreign societies, both in terms of our aid and development programs as well as COIN and military assistance of various kinds.

….A good example of what we did involves things called Collection Centers, which our government built to afford Afghan farmers a place to showcase products to vendors. The Center is supposed to create greater revenue for farmers. Despite the best of intent, and a lot of hard work, the program was and remains an utter disaster.

Why has the program been such a flop?

We, the US, came in and established these centers without ever considering how the existing system worked. We never bothered to determine how changing the system might be accepted or rejected, or cause harm to those we intended to help. We didn’t consider if the Afghans even had a system (which, of course, they did).

Instead of defining the existing system and assessing whether or how our tool might address a need, we just came in and started changing things It didn’t work, and we barely cared that it didn’t; and we reported the opposite.-–

An aside–the if you read the report, look for mentions of Afghan involvement in the process. You won’t find it.

I spoke with an Army Major in charge of the program and asked him about the existing local market chain from grower to consumer. He admitted that he didn’t know about it. When I asked why he was trying to change it, I was met with silence.

We also never considered if we were creating a harmful situation for farmers, and that ignorance caused unexpected and undesirable outcomes. At the most basic level, Taliban fighters notice “western” influence. A farmer who uses (though they never actually did) the collection center is exposing his allegiance with the US and therefore putting his family and himself in jeopardy. Further, the farmer buyer relationship is established relationship. Changing the nature of their transaction is reckless in such a conservative, Taliban influenced place. What we can’t do is create a situation that is perceived to increase uncertainty for farmers.

We built these centers throughout Afghanistan. At every instance, covering multiple units, I observed the same poor US decision-making. We never bothered to involve our Afghan partners in the decisions and never allowed them to guide us on how to work within their system. We forced these centers upon the people of Afghanistan, and wasted more than money and resources in the process. We wasted opportunities to actually improve the lot of the farmer, which makes de-legitimizing the Taliban fighters more challenging.

Turner wore many different hats in Iraq and Afghanistan but in one extended tour in Zabul, Pete worked closely with political science Professor Richard Ledet, who in addition to his scholarly expertise, was uncannily good at donning local attire and blending in with Afghan villagers. 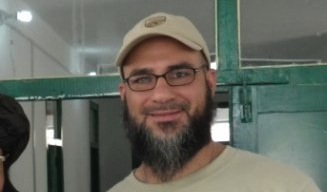 Turner and his partner Jon, interviewed Ledet recently on their program:

What happens when an institution attempts to make changes intending to improve the lot of others? What if they ignore culture and fail to communicate with the people designed to receive a benefit from the change? We address these questions in ourepisode with Dr. Richard Ledet.

We are fans of Rich. He’s a warrior, professor, surfer, hunter, all-around brilliant, rugged dude. His current gig is working as a Poli Sci professor at Troy University in Troy Alabama. Rich and I worked together in Afghanistan studying how effective or “affective” our work was as US assets helping Afghans. It’s not common for Poli Sci professors to get so close to the ground truth, and then to be able to test our policy and strategic programs as they implemented at the lowest level. This experience, we believe, is fascinating and applies directly to the real world.

Listen to the interview here on The Break it Down Show.