Lewis Shepherd on the IC/Mil/NatSec Potential of Holographic Computing 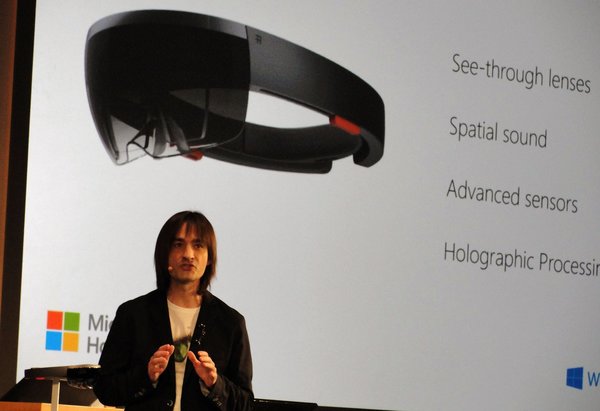 Lewis Shepherd, formerly of the DIA and IC and recently of Microsoft, has an outstanding post on Microsoft’s exciting ambient/holographic computing interface HoloLens. What I saw in the videos is stunning and I then ran them by an extremely tough, tech savvy and jaded audience – my students – their jaws dropped. It’s that impressive.

In my seven happy years at Microsoft before leaving a couple of months ago, I was never happier than when I was involved in a cool “secret project.”

Last year my team and I contributed for many months on a revolutionary secret project – Holographic Computing – which was revealed today at Microsoft headquarters.  I’ve been blogging for years about a variety of research efforts which additively culminated in today’s announcements: HoloLens, HoloStudio for 3D holographic building, and a series of apps (e.g. HoloSkype, HoloMinecraft) for this new platform on Windows 10.

For my readers in government, or who care about the government they pay for, PAY CLOSE ATTENTION.

It’s real. I’ve worn it, used it, designed 3D models with it, explored the real surface of Mars, played and laughed and marveled with it. This isn’t Einstein’s “spooky action at a distance.” Everything in this video works today:

These new inventions represent a major new step-change in the technology industry. That’s not hyperbole. The approach offers the best benefit of any technology:empowering people simply through complexity, and by extension a way to deliver new & unexpected capabilities to meet government requirements.

One important point I care deeply about: Government missed each of those three revolutions. By and large, government agencies at all levels were late or slow (or glacial) to recognize and adopt those revolutionary capabilities. That miss was understandable in the developing world and yet indefensible in the United States, particularly at the federal level.

I worked at the Pentagon in the summer of 1985, having left my own state-of-the-art PC at home in Stanford, but my assigned “analytical tool” was a typewriter. In the early 2000s, I worked at an intelligence agency trying to fight a war against global terror networks when most analysts weren’t allowed to use the World Wide Web at work. Even today, government agencies are lagging well behind in deploying modern smartphones and tablets for their yearning-to-be-mobile workforce.

This laggard behavior must change. Government can’t afford (for the sake of the citizens it serves) to fall behind again, and  understanding how to adapt with the holographic revolution is a great place to start, for local, national, and transnational agencies.

I remarked to Shepherd that the technology reminded me of the novels by Daniel Suarez, DAEMON and FREEDOM. Indeed, I can see HoloLens allowing a single operator to control swarms of intelligent armed drones and robotic over a vast theater or in close-quarter tactical combat as easily as it would permit someone to manage a construction site, remotely assist in a major surgery, design a new automobile or play 3D Minecraft.

Mashable –Microsoft HoloLens won’t be the next Google Glass, and …