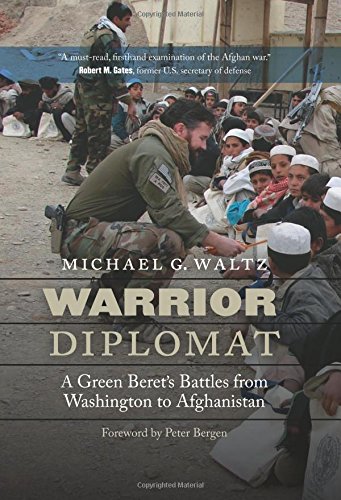 I have a new article up at Pragati: The Indian National Interest. A review of Warrior Diplomat by Michael G. Waltz

….Waltz, now the president of Metis Solutions, brings to the table a powerful juxtaposition of perspectives on the Afghan war. As a Department of Defense civilian official, he served variously as an Interagency Counter narcotics Coordinator in the Office of the Secretary of Defense (OSD) developing strategies to combat opium trafficking in Pashtun regions, as the Pentagon’s Afghanistan Country Director, as the Special Adviser to Vice President Dick Cheney on South Asia and Counterterrorism and finally, as an adviser on negotiations with the Taliban to the deputy assistant secretary of defense in the Obama administration.

This is “making policy at 50,000 feet”, briefing and advising senior administration officials on national policy formulation and implementation. No contrast could be more dramatic with Waltz’s alternate role as a Green Beret company commander living among Pashtun tribal villagers, drinking tea with tribal elders, working with village police chiefs, engaging in brutal firefights with Haqqani network insurgents, disarming IEDs and delivering medical care to remote Afghan districts. Like few other officers, Waltz could see the life or death impact of policy he had helped craft on his own soldiers, Afghan farmers, and the Taliban enemy; but at other times, the blindness of policy or its complete irrelevance to the often ugly ground truth of counterinsurgency warfare.

Though the story of Waltz’s gritty experience in combat looms large in Warrior Diplomat, he also lays out a hard analysis regarding the self-created problems that impaired the American war in Afghanistan, including a paucity of resources, the incapacity of NATO partners, a muddled strategy, bureaucratic and political risk aversion and micromanagement of military operations down to the smallest units, a stubborn refusal to confront Pakistan over Taliban sanctuaries and announcing an early withdrawal date from Afghanistan. There is an additional subtext to Waltz’s story; the transformation of the legendary Green Beret Special Forces, intended to work autonomously in small groups training and fighting with indigenous forces, to ‘conventionalised’ units of ‘door-kickers’ who spend enormous amounts of time on powerpoint slides, making fruitless requests for helicopters or artillery support and fighting the timidity and capriciousness of Waltz’s own chain of command.

Some of you may have read American Spartan or my earlier review of that book. The stories of Michael Waltz and Jim Gant are not the same but the setting, their operational environment, largely was. Some of the frankly preposterous, Catch-22 restrictions with which Waltz struggled mightily to comply while effectively circumventing may illuminate some of the unspoken reasons why Jim Gant took a different path.

I cannot say it was the objective of the US Army and ISAF to prevent effective COIN operations in Afghanistan in writing their regulations and ROE, but it might as well have been