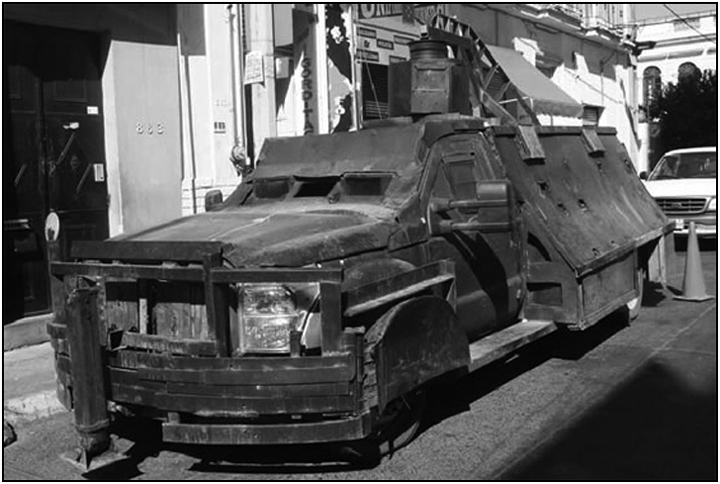 If the symbol of the 20th century insurgent was the AK-47 and a red banner, his 21st century counterpart may someday be recognized by the suicide belt and the “homemade tank”. Irregular fighters have always used light arms, civilian passenger vehicles and armor captured (or donated by) from conventional armies, but the ability to produce serviceable fighting armored cars is a new wrinkle. They could not stand up to an American or Russian tank company, of course, but they are not meant to do so.

Most prevalent and evolved in Mexico’s narco-insurgency where cartels use these “monsters” converted from SUVs and various types of light and heavy trucks to battle one another and as “troop carriers” but these DIY armored vehicles have also appeared in the recent Libyan and ongoing Syrian civil wars. Where heavy anti-tank weapons, air power and real tanks are scarce, these narco-tanks are useful additions to irregular combat power and convey an intimidating image to lightly armed police and the public.

Dr. Robert Bunker and Byron Ramirez, with the support of Small Wars Journal, Borderland Beat.com and the Foreign Military Studies Office at Fort Leavenworth, have a new scholarly compilation on the subject of irregular use of DIY armor in Mexico:

….The wave of violence that has left thousands dead began in early 2005, when former Mexican
president Vicente Fox sent government troops to Tamaulipas to fight the cartels. For the past
seven years the government has ordered its military to fight the cartels directly, which, in turn,
has led drug cartels to improvise and develop their own methods of warfare to combat both
government troops and other competing cartels.

The extreme rivalry among various Mexican drug cartels for regional control of the drug trade
market has yielded an arms race. The following collection of articles and images addresses a
segment of the military technology utilized by violent non-state actors during this period: “narco armor” or, more accurately, improvised armored fighting vehicles (IAFV).

….Mexican cartel use of IAFVs and armored sport utility vehicles (ASUV) may yield some
important lessons for military counter-criminal insurgency efforts. Still, many unanswered
questions exist concerning the fielding of narco armor in Mexico. Reports of these vehicles
being fielded span roughly from mid-2010 to the beginning of 2012, with a spike in activity 5
surrounding them taking place around mid-2011. These vehicles had predominantly been utilized

in the Mexican state of Tamaulipas in engagements between the Zetas and Gulf cartels and in a
few other locales (see Map Locations). While it has been said that the Mexican government has
seized well over one hundred of these vehicles, only about two dozen photographic examples
exist per our research (see Picture Gallery).

….Given the apparent cessation of the fielding of narco armor since early 2012, quite possibly these vehicles have reached an evolutionary dead end, with more emphasis once again placed by the cartels on fielding more stealth-masked armored vehicles, such as armored SUVs, that better blend in with civilian cars and trucks so as to eluded identification and targeting by Mexican federal forces. Still, given the ever changing conflict waging in Mexico among the cartels and against the Mexican government, future resumption of IAFV employment will always remain a potential.

During the Russian civil war (1917-1922), armored trains complete with heavy machine guns and artillery were used by both Bolshevik and White armies across the vast expanse of the Eurasian steppe and the armored train subsequently made spotty appearances in civil wars in China and Spain before fading away. This less likely to happen with homemade armor which is smaller and infinitely more mobile and can be created in a sufficiently large garage with time, elbow grease and a supply of scrap metal.