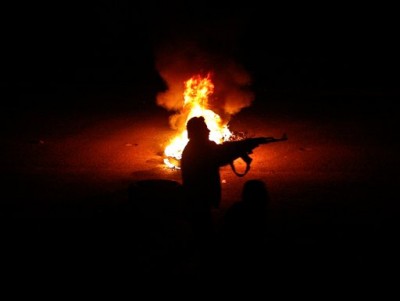 Top Billing! Galrahn If It’s Not “War,” It Sounds Like Checkers

….Words matter, and when they are not allowed to matter in policy, we are not being honest with ourselves. Over the last two days John Kerry described the political object with Syria as “to deter, disrupt, prevent, and degrade the potential for, future uses of chemical weapons or other weapons of mass destruction” by the Assad regime in Syria. The Obama administration has apparently convinced itself that a Desert Fox Part II action in Syria will produce the desired result, apparently ignoring that Desert Fox was in part what led to the invasion of Iraq in 2003. I do not know any serious expert who believes the Obama administrations military approach to Syria will achieve a positive political object for the US.

The Obama administrations national security leadership, in Congressional testimony, is promoting a delusion regarding the act of war, and is incapable of admitting they are about to start a war. Most troubling, they are intentionally dismissing consequences and the gravity of such action under the assumption that military superiority translates to strategic success. The United States does not have a strategy that political leaders can articulate publicly on Syria, nor is the Obama administrations national security leadership publicly seeking meaningful military objectives of consequence to conditions in Syria. The United States does not have a coalition of support to provide legitimacy for military action, a coalition that protects the US from escalation or retaliation. John Kerry, in front of Congress, described those who believe it unwise for the US to inject our nation into another nations civil war uninvited, as armchair isolationists. No one knew for certain the intelligence cited by Colin Powell was wrong in 2003. Every human being educated on the definition of war knows John Kerry is wrong in 2013, and no one credible on the topic of war will ever be able to argue otherwise.

The emphasis on sending a message of resolve may explain why the Clinton administration glossed over spotty intelligence about proposed targets for the cruise missile strikes. The El-Shifa pharmaceutical plant in Sudan was targeted because it was thought to be a chemical weapons facility. It soon became clear that El-Shifa was nothing of the sort, and that intelligence reporting had in fact never shown definitively that terrorists were using the plant to manufacture WMDs. Part of the reason for this intelligence oversight was that the administration was searching a priori for targets to strike and, consequently, giving inadequate consideration to their actual relevance. The New Republic later noted that, along with the al-Qaeda training facility in Afghanistan, officials wanted to hit “another country, preferably in Africa, where al Qaeda’s terrorist network enjoyed support. [CIA director George] Tenet’s job was to provide targets” [emphasis added].

The symbolic function of the targets, then, was more important than their strategic relevance. Even the number of targets was determined by aesthetic considerations rather than strategic ones: analysts including Micah Zenko argue that the team wanted to hit exactly two targets in order to mirror the two embassies that al-Qaeda had attacked.

Edward Luttwak – In Syria, America Loses if Either Side Wins

….The war is now being waged by petty warlords and dangerous extremists of every sort: Taliban-style Salafist fanatics who beat and kill even devout Sunnis because they fail to ape their alien ways; Sunni extremists who have been murdering innocent Alawites and Christians merely because of their religion; and jihadis from Iraq and all over the world who have advertised their intention to turn Syria into a base for global jihad aimed at Europe and the United States.

Given this depressing state of affairs, a decisive outcome for either side would be unacceptable for the United States. An Iranian-backed restoration of the Assad regime would increase Iran’s power and status across the entire Middle East, while a victory by the extremist-dominated rebels would inaugurate another wave of Al Qaeda terrorism.

There is only one outcome that the United States can possibly favor: an indefinite draw.

President Barack Obama today welcomed to the White House Mr. Ayman al Zawahiri, the leader of al Qaeda, for the formal signing of a pact of alliance between al Qaeda and the United States of America. The new alliance treaty envisions broad-scale cooperation between al Qaeda and the United States in the cause of destroying states. Following the signing of the treaty, President Obama will direct US government agencies, including the Pentagon, the CIA, and the NSA to work with their al Qaeda counterparts on projects of joint benefit, including generating phony intelligence to justify American military interventions, carrying out pseudo-ops to create humanitarian tragedies that can be blamed on state leaders, and generally spreading anarchy throughout the world.

The Glittering Eye –Is It To Be Isolationists vs. Militarists?

Bill Keller presents a false and vicious dichotomy. Although he’s a bit sheepish about it, he’s ultimately arguing that, if we are to be engaged with the world, it must be at the point of a gun ….

….I see barely a smidgeon of isolationism in contemporary America. There are millions of Americans living and working overseas, we import a huge proportion of our consumer goods and a lot of our food from abroad, and we have a higher proportion of immigrants presently living in the United States than at at all but a very few times in our history.

Who is he, Hideki Tojo? Is the only form of engagement with the world military engagement? That’s militarism.

Outside the Beltway (Matconis) –Are The Russians About To Outsmart Obama And Kerry On Syria?

Not the Singularity (Hynd) –Does The NSA’s General Alexander Have Too Much Power?

Campaign Reboot –What value to a poll? Syria edition

Friend of Zenpundit Fred Leland had his LESC blog ranked # 3 out of all criminal justice related blogs. Congratulations Fred!!!!