Alexander Hamilton thought he knew. And who is Colonel Hamilton (as he so liked to be called) that he should know? 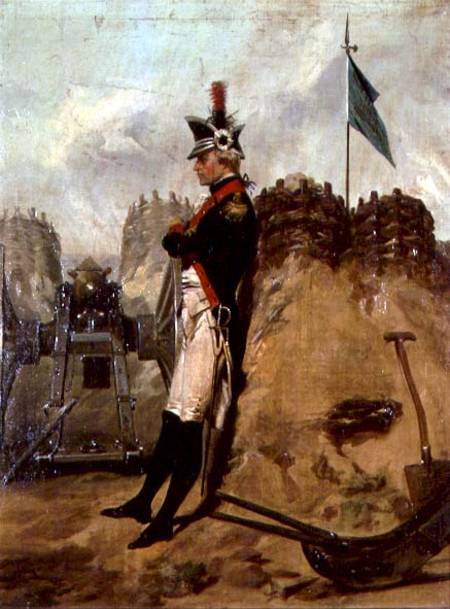 Not (then) Colonel Hamilton

Consider, the profligacy of his life; his fornications, adulteries and his incests… lol

[He is] an insolent coxcomb who rarely dined in good company, where there was good wine, without getting silly and vaporing about his administration like a young girl about her brilliants and trinkets, yet I lose all patience when I think of a bastard brat of a Scottish pedlar daring to threaten to undeceive the world in their judgment…This creature was in a delirium of ambition; he had been blown up with vanity by the tories, had fixed his eyes on the highest station in America, and he hated every man, young or old, who stood in his way or could in any manner eclipse his laurels or rival his pretensions.

How far Colo. Hamilton, of whom you ask my opinion as a financier, has turned his thoughts to that particular study I am unable to answer because I never entered upon a discussion on this point with him; but this I can venture to advance from a thorough knowledge of him, that there are few men to be found, of his age, who has a more general knowledge than he possesses, and none whose Soul is more firmly engaged in the cause, or who exceeds him in probity and Sterling virtue…

In every relation, which [he has] borne to me, I have found that my confidence in [his] talents, exertions and integrity, has been well placed. I the more freely render this testimony of my approbation, because I speak from opportunities of information which cannot deceive me, and which furnish satisfactory proof of [his] title to public regard.

Hamilton’s character is extremely unfortunate. An opinion has grown out of it, which at present obtains almost universally, that his character is radically deficient in discretion, and therefore [we] ask, what avail the most preeminent talents—the most distinguished patriotism—without the all important quality of discretion? Hence he is considered as an unfit head…and we are in fact without a rallying point.

Colonel Hamilton was indisputably pre-eminent. This was universally conceded. He rose at once to the loftiest heights of professional eminence by his profound penetration, his power of analysis, the comprehensive grasp and strength of his understanding, and the firmness, frankness, and integrity of his character.

He generally spoke with much animation and energy and with considerable gesture. His language was clear, nervous, and classical. His investigations penetrated to the foundation and reason of every doctrine and principle which he examined, and he brought to the debate a mind filled with all the learning and precedents applicable to the subject. He never omitted to meet, examine, and discover the strength or weakness, the truth or falsehood of every proposition with which he had to contend. His candor was magnanimous and rose to a level with his abilities. His temper was spirited but courteous, amiable and generous, and he frequently made pathetic and powerful appeals to the moral sense and patriotism, the fears and hopes of the assembly, in order to give them a deep sense of the difficulties of the crisis and prepare their minds…

An indiscretion got him into trouble with W— for whom he served as confidential secretary; other indiscretions obliged him to leave C— in ?83. He has a little too much pretension and too little prudence.

He is only too impetuous and because he wants to control everything, he fails in his intentions. His eloquence is often out of place in public debates, where precision and clarity are preferred to a brilliant imagination. It is believed that Mr. Hamilton is the author of the pamphlet entitledThe Federalist. He has again missed his mark. This work is of no use to educated men and it is too learned and too long for the ignorant. lol

It was in this Federalist that Col. Hamilton, one of the three fevered GLOWING nitwits OF DESTINY of his epoch, said what he thought Lucius Aemilius Paullus knew and when he knew it:

The experience of other Nations will afford little instruction on this head. As far, however, as it teaches anything, it teaches us not to be enamored of plurality in the Executive. We have seen that the Achæans, on an experiment of two Prætors, were induced to abolish one. The Roman history records many instances of mischiefs to the Republic from the dissensions between the Consuls, and between the Military Tribunes, who were at times substituted for the Consuls. But it gives us no specimens of any peculiar advantages derived to the State from the circumstance of the plurality of those magistrates. That the dissensions between them were not more frequent or more fatal, is a matter of astonishment, until we advert to the singular position in which the Republic was almost continually placed, and to the prudent policy pointed out by the circumstances of the State, and pursued by the Consuls, of making a division of the Government between them. The Patricians engaged in a perpetual struggle with the Plebeians for the preservation of their ancient authorities and dignities; the Consuls, who were generally chosen out of the former body, were commonly united by the personal interest they had in the defence of the privileges of their order. In addition to this motive of union, after the arms of the Republic had considerably expanded the bounds of its empire, it became an established custom with the Consuls to divide the administration between themselves by lot one; of them remaining at Rome to govern the city and its environs; the other taking the command in the more distant provinces. This expedient must, no doubt, have had great influence in preventing those collisions and rivalships which might otherwise have embroiled the peace of the Republic.

Next morning the two Consuls broke up their camp, and advanced to where they heard that the enemy were entrenched. On the second day they arrived within sight of them, and pitched their camp at about fifty stadia distance. But when Aemilius observed that the ground was flat and bare for some distance round, he said that they must not engage there with an enemy superior to them in cavalry; but that they must rather try to draw him off, and lead him to ground on which the battle would be more in the hands of the infantry.

He refused to let his glow so shine for Gaius Terentius Varro, Paullus’ consular colleague for 216 B.C.:

But Caius Terentius being, from inexperience, of a contrary opinion, there was a dispute and misunderstanding between the two leaders, which of all things is the most dangerous. It is the custom, when the two Consuls are present, that they should take the chief command on alternate days; and the next day happening to be the turn of Terentius, he ordered an advance with a view of approaching the enemy, in spite of the protests and active opposition of his colleague.

Hannibal set his light-armed troops and cavalry in motion to meet him, and charging the Romans while they were still marching, took them by surprise and caused a great confusion in their ranks. The Romans repulsed the first charge by putting some of their heavy-armed in front; and then sending forward their light-armed and cavalry, began to get the best of the fight all along the line: the Carthaginians having no reserves of any importance, while certain companies of the legionaries were mixed with the Roman light-armed, and helped to sustain the battle. Nightfall for the present put an end to a struggle which had not at all answered to the hopes of the Carthaginians.

But next day Aemilius, not thinking it right to engage, and yet being unable any longer to lead off his army, encamped with two-thirds of it on the banks of the Apennines…For the other third of his army he caused a camp to be made across the river, to the east of the ford, about ten stades from his own lines, and a little more from those of the enemy; that these men, being on the other side of the river, might protect his own foraging parties, and threaten those of the enemy…Aemilius, dissatisfied with his position, and seeing that the Carthaginians would soon be obliged to shift their quarters for the sake of supplies, kept quiet in his camps, strengthening both with extra guards.

After waiting a considerable time, when no one came out to attack him, Hannibal put the rest of the army into camp again, but sent out his Numidian horse to attack the enemy’s water parties from the lesser camp. These horsemen riding right up to the lines and preventing the watering, Caius Terentius became more than ever inflamed with the desire of fighting, and the soldiers were eager for a battle, and chafed at the delay. For there is nothing more intolerable to mankind than suspense; when a thing is once decided, men can but endure whatever out of their catalogue of evils it is their misfortune to undergo…When he took over the command on the following day, as soon as the sun was above the horizon, Caius Terentius got the army in motion from both the camps…

Though he had been from the first on the right wing, and had taken part in the cavalry engagement, Lucius Aemilius still survived. Determined to act up to his own exhortatory speech, and seeing that the decision of the battle rested mainly on the legionaries, riding up to the center of the line he led the charge himself, and personally grappled with the enemy, at the same time cheering on and exhorting his soldiers to the charge…

Lucius Aemilius fell, in the thick of the fight, covered with wounds: a man who did his duty to his country at that last hour of his life, as he had throughout its previous years, if any man ever did. As long as the Romans could keep an unbroken front, to turn first in one direction and then in another to meet the assaults of the enemy, they held out; but the outer files of the circle continually falling, and the circle becoming more and more contracted, they at last were all killed on the field; and among them Marcus Atilius and Gnaeus Servilius, the Consuls of the previous year, who had shown themselves brave men and worthy of Rome in the battle.

While this struggle and carnage were going on, the Numidian horse were pursuing the fugitives, most of whom they cut down or hurled from their horses; but some few escaped into Venusia, among whom was Caius Terentius, the Consul, who thus sought a flight, as disgraceful to himself, as his conduct in office had been disastrous to his country.

“Contemptible, if true“, as our third Vice President once observed.