“Sin, Death, and Hell have set their Marks on Him” The bones of Richard III, Shakespeare’s greatest villain and the last King of England to be killed in battle have been discovered and identified by DNA testing:

….There were cheers when Richard Buckley, lead archaeologist on the hunt for the king’s body, finally announced that the university team was convinced “beyond reasonable doubt” that it had found the last Plantagenet king, bent by scoliosis of the spine, and twisted further to fit into a hastily dug hole in Grey Friars church, which was slightly too small to hold his body.

But by then it was clear the evidence was overwhelming, as the scientists who carried out the DNA tests, those who created the computer-imaging technology to peer on to and into the bones in raking detail, the genealogists who found a distant descendant with matching DNA, and the academics who scoured contemporary texts for accounts of the king’s death and burial, outlined their findings.

….Richard died at Bosworth on 22 August 1485, the last English king to fall in battle, and the researchers revealed how for the first time. There was an audible intake of breath as a slide came up showing the base of his skull sliced off by one terrible blow, believed to be from a halberd, a fearsome medieval battle weapon with a razor-sharp iron axe blade weighing about two kilos, mounted on a wooden pole, which was swung at Richard at very close range. The blade probably penetrated several centimetres into his brain and, said the human bones expert Jo Appleby, he would have been unconscious at once and dead almost as soon. 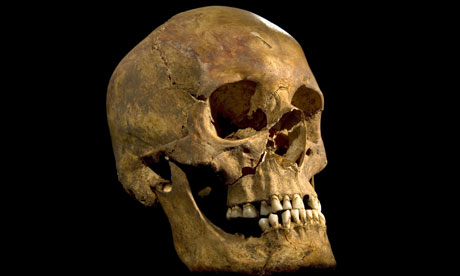 Injuries to the skeleton appear to confirm contemporary accounts that the king died in battle. Photograph: AFP/Getty Images

The injury appears to confirm contemporary accounts that he died in close combat in the thick of the battle and unhorsed – as in the great despairing cry Shakespeare gives him: “A horse! A horse! My kingdom for a horse!”

Richard III, usurper and probable regicide of his nephew the boy King, was the last truly medieval King of England. Had Richard lived to rule, his reign would have been characterized by the same bloody uprisings and civil strife that marked the War of the Roses. England was fortunate in his successor who had bested him in battle, Henry Tudor who became King Henry VII was an energetic and far seeing monarch who restored a war-wracked and bankrupt England to peace and fiscal health and set the foundations of the modern United Kingdom and the future world-spanning British Empire. It was Henry who started the Royal Navy and curtailed the ability of the nobility to wage war as they pleased with large private armies, by taxing them for each man at arms, thus ending bastard feudalism ; recalcitrant rebels were executed and justices of the peace established in every shire to enforce the law of the realm rather than the corrupt whims of manorial courts.

Richard III has his devoted fans as well his detractors. Except for his impatient ruthlessness, Richard probably was little worse, morally speaking, than his fellow medieval monarchs in an age when brutality and the rule of the strong was the norm.  However, unlike the brilliant Henry, Richard would have done little to improve the situation and might have made life in England more savagely violent.