This is an amazing post. After (accurately) skewering Bill O’Reilly for getting basic facts and historical terminology horribly wrong,  Juan then draws an equally  fact-free conclusion that suits his political worldview out of thin air. If  Cole thinks the country has become less oligarchic and more egalitarian since 1996, he’s high.

Pundit Press –Fraud in PA: Obama Got Over 99% of Vote at Polls Where GOP Inspectors were Removed; Turnout Somehow “30%” Above Gov’t Numbers

Remember the Democratic/liberal pre-election meme on twitter that “voter fraud almost never happens”?  Turns out it does happen …..in heavily Democratic urban areas.

Kevin Drum –We Should Probably All Calm Down a Bit

How do our foreign friends and foes see the 2012 election for President?

Der Spiegel – In US Election, He Who Lies Wins

Left-wing Krauts at their most obnoxious.

The Economist – Which one?

The Economist endorses “the changeling”.

Even more surprisingly straightforward, but the senior Foreign ministry spokesman who looks like an Iranian Rod Blagojevich, makes up for it in an outburst of bloviation about which no American could possibly care. 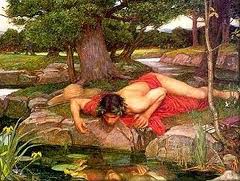 Narcissism is self-iconization. To control our internal terror, insecurity, etc., one mode of coping is to erect an icon in our minds. This icon might be a mentor, a role model, a guru. It might be a lover or a parent, a teacher, a coach. I’ve done it. We’ve all done it. Sometimes it’s healthy. It’s a stage in the progression toward independence and self-command.

When we set someone up as an icon, we say to ourselves, “Well, I might not be able to handle my life by myself, but X is really strong and smart and brave. X can guide me.” That’s the iconization of others.

Narcissism is when we iconize ourselves.

We decide (unconsciously) that we are the center of the universe. In our minds–and in our closets, our garages, and our bank accounts–we begin erecting an edifice of adoration for this new god, ourselves.

We convince ourselves that we are smarter, prettier, meaner, cooler, hipper, etc. than anyone else (or at least that we’re smart enough, pretty enough, and mean enough to handle any problem.)

In a way, this mechanism is healthy. In its benign form it’s simply self-confidence. And it’s often true that the narcissist’s beliefs about herself are valid, within reason. Often the narcissist is indeed brave, smart, strong, savvy, and so forth.

What is really happening inside the narcissist? [….]

….As near as I can figure from the following report the plan is to go around the EU by pressuring the Obama administration to arm the Syrian ‘rebels’ — or, if the administration has been shipping arms in clandestine fashion to the ‘rebels’ via Libya, to ship weapons aboveboard. Oh and the rebels want money in addition to more weapons.  Lots of money.

No worries; the British will supervise!  But after what they did to us in Basra, in Helmand and in post-Gaddafi Libya, one would think the closet monarchists in Washington had learned their lesson. Somehow I don’t think they did.

Pundita. Come for the sarcasm….stay for the insights.

“Courtney Messerschmidt“ or one of the peeps who are “her” is maintaining the fort for the Iron Major with defense news links. When we all found out Courtney wasn’t real it was like that ugly Santa Claus incident all over again

I would like to depart from my normal protocol and feature a comment on a post here, regarding the election and the GOP, by Dr. David Ronfeldt because it is spot on. For those unfamiliar with Ronfeldt, a co-author of Networks and Netwars, “TIMN” refers to his analytic model of ” Tribes, Institutions, Markets, Networks”.

I am Zen and I approve of this message:

From a TIMN perspective, the Republicans lost because they’ve become excessively tribal, and much less institutional and market-oriented.  More to the point, the Republicans lost because of the media:  not the mainstream media or the liberal media, but their very own right-wing conservative media — particularly Fox News, along with right-wing radio talk shows, and all their well-known opinionators.  These media have become so dominated by tribalists who aim to tribalize that they’ve become counter-productive, even destructive for the Republican party.

The usual frames for discussing what I’m trying to get at are “partisanship” and “polarization”.  But those frames have become too dryly analytical and easy to treat as isolatable criticisms.  At this point, when matters have become so excessive, tribalism is a more accurate, dynamic frame.

How do extreme tribalists think and act?  They demonize opponents.  They believe it’s okay to lie to outsiders. They require unity, even a kind of purity for their side.  They stress identity and loyalty.  They turn combative and uncompromising.  They shun moderates once on their side.  They engage in magical thinking about their prospects.  Et ceteraa.  And of course they accuse the other side of terrible tribalism.

There is nothing basically wrong — and much can still be righted — about key Republican principles: e.g., limited government, free enterprise, fiscal and social responsibility, and family.  But recovery from the current debacle calls for more than the kinds of detailed dissections, self-reassurances, and tinkering adjustments that are now being talked about in election post-mortems.  From a TIMN perspective, the party will have to de-tribalize and re-institutionalize, as well as become more market-oriented about ideas, in order to correct its approaches to those principles and restore itself to playing a nationally constructive, attractive role.  And if it’s leaders really do want to temper the roles of tribalism, they are going to have to rethink their relations with those associated media, which gain huge benefits and tout great success from being excessively tribal (while deny being too tribal?).