The Master and the Minion

The Russian girl-punk rock band Pussy Riot has done something with their protest at  Christ the Savior Cathedral that prior cases of oppression, election-fraud, corruption and murder of Putin’s critics by agents of the siloviki regime failed to do – put a defiant human face on political persecution in Russia. Something we have not seen since the days of Sakharov and Solzhenitsyn. 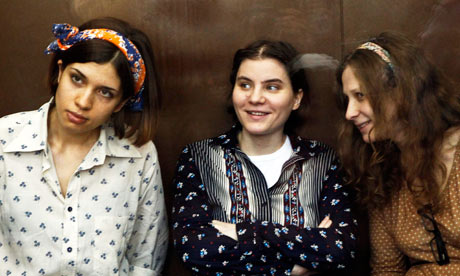 A reminder that when men are not free, mocking insolence is a form of bravery.

In a thoughtful post, Charles Cameron examination of the tradition of “Holy Fools” in Russia is useful and culturally relevant as to how this event was intended to register with a Russian audience. Pussy Riot was being audaciously offensive in their selection of performance sites, as TM Lutas explains:

Orthodoxy is not a religion that is widely understood in the West. So it’s actually the rare pundit that catches how offensive what this punk riot group was doing actually was. There’s a subtitled version of the video that helps. The video misses the positional problems. The picture screen, called an iconostasis is something like the old altar rails of Catholicism but with fairly elaborate rituals surrounding the structure. There are three doors, the center one is called the holy doors. As a lay person you’re not even supposed to walk in front of that door. It’s viewed as disrespectful, even sacrilegious. So the people in charge of order and discipline were a bit stuck because these girls were dancing in the sanctuary, in front of the iconostasis and extracting them actually meant that they had to break the rules too. Several times a Pussy Riot girl bowed and did a full prostration. One does these things towards the altar in Orthodoxy. Reversing this as the protesters did is viewed as idolatry. Who, exactly, are they bowing to? That’s the genesis of the “devil dancing” talk in their trial.

Putin may have been a target but he certainly wasn’t the target. Their attack had a much wider range of victims. This was an attack on Orthodoxy, an attack on symphonia, the concept of church and state in complementary roles and mutual respect, and also an attack on Putin.

In 4GW thinking, the strong lose when they are forced to fight the weak on terms that favor the weak. Pussy Riot – a group of young women – engineered a protest at a location whose significance meant that the authorities could not easily ignore or suppress it quietly with brutal thuggery in the shadows. By making Vladimir Putin the lyrical center of gravity, local officials were  made to look sycophantic and toadying, national officials petty and foolish. The Russian authorities, burly and oafish like their Soviet counterparts, have been reduced to fighting young girls while the rigged legal system that passes for justice in Russia is showcased in the unsparing glare of the global media.

By daring the authorities to make them political prisoners, Maria Vladimirovna Alyokhina, Yekaterina Stanislavovna Samutsevich and Nadezhda Andreyevna Tolokonnikova have made the regime look weak.

Moreover, their actions are a not so subtle reminder to Russians that the Orthodox Church is a corrupt vessel, a propaganda arm of the regime with a long tradition of KGB agents as Patriarchs and squalid informers as clergymen. The Church in Russia has not been free of the tentacles of state security since the day Lenin ordered the arrest of St. Tikhon. President Putin and Patriarch Kyrill are not peers temporal and spiritual, but fellow alumni of the same organs as the Big Lubyanka’s gaolers and policemen.

In the closing statement, the defendant is expected to repent, express regret for her deeds, or enumerate attenuating circumstances. In my case, as in the case of my colleagues in the group, this is completely unnecessary. Instead, I want to voice some thoughts about what has happened to us.
That Christ the Savior Cathedral had become a significant symbol in the political strategy of the authorities was clear to many thinking people when Vladimir Putin’s former [KGB] colleague Kirill Gundyayev took over as leader of the Russian Orthodox Church. After this happened, Christ the Savior Cathedral began to be openly used as a flashy backdrop for the politics of the security forces, which are the main source of political power in Russia.
Why did Putin feel the need to exploit the Orthodox religion and its aesthetic? After all, he could have employed his own, far more secular tools of power—for example, the state-controlled corporations, or his menacing police system, or his obedient judicial system. It may be that the harsh, failed policies of Putin’s government, the incident with the submarine Kursk, the bombings of civilians in broad daylight, and other unpleasant moments in his political career forced him to ponder the fact that it was high time to resign; that otherwise, the citizens of Russia would help him do this. Apparently, it was then that he felt the need for more persuasive, transcendent guarantees of his long tenure at the pinnacle of power. It was then that it became necessary to make use of the aesthetic of the Orthodox religion, which is historically associated with the heyday of Imperial Russia, where power came not from earthly manifestations such as democratic elections and civil society, but from God Himself.
How did Putin succeed in this? After all, we still have a secular state, and any intersection of the religious and political spheres should be dealt with severely by our vigilant and critically minded society. Right? Here, apparently, the authorities took advantage of a certain deficit of the Orthodox aesthetic in Soviet times, when the Orthodox religion had an aura of lost history, of something that had been crushed and damaged by the Soviet totalitarian regime, and was thus an opposition culture. The authorities decided to appropriate this historical effect of loss and present a new political project to restore Russia’s lost spiritual values, a project that has little to do with a genuine concern for the preservation of Russian Orthodoxy’s history and culture.
It was also fairly logical that the Russian Orthodox Church, given its long mystical ties to power, emerged as the project’s principal exponent in the media. It was decided that, unlike in the Soviet era, when the church opposed, above all, the brutality of the authorities toward history itself, the Russian Orthodox Church should now confront all pernicious manifestations of contemporary mass culture with its concept of diversity and tolerance.
Implementing this thoroughly interesting political project has required considerable quantities of professional lighting and video equipment, air time on national television for hours-long live broadcasts, and numerous background shoots for morally and ethically edifying news stories, where the Patriarch’s well-constructed speeches would in fact be presented, thus helping the faithful make the correct political choice during a difficult time for Putin preceding the election. Moreover, the filming must be continuous; the necessary images must be burned into the memory and constantly updated; they must create the impression of something natural, constant, and compulsory.
Our sudden musical appearance in the Cathedral of Christ the Savior with the song “Mother of God, Drive Putin Out” violated the integrity of the media image that the authorities had spent such a long time generating and maintaining, and revealed its falsity. In our performance we dared, without the Patriarch’s blessing, to unite the visual imagery of Orthodox culture with that of protest culture, thus suggesting that Orthodox culture belongs not only to the Russian Orthodox Church, the Patriarch, and Putin, but that it could also ally itself with civic rebellion and the spirit of protest in Russia.
Perhaps the unpleasant, far-reaching effect of our media intrusion into the cathedral was a surprise to the authorities themselves. At first, they tried to present our performance as a prank pulled by heartless, militant atheists. This was a serious blunder on their part, because by then we were already known as an anti-Putin feminist punk band that carried out its media assaults on the country’s major political symbols.
In the end, considering all the irreversible political and symbolic losses caused by our innocent creativity, the authorities decided to protect the public from us and our nonconformist thinking. Thus ended our complicated punk adventure in the Cathedral of Christ the Savior.
I now have mixed feelings about this trial. On the one hand, we expect a guilty verdict. Compared to the judicial machine, we are nobodies, and we have lost. On the other hand, we have won. The whole world now sees that the criminal case against us has been fabricated. The system cannot conceal the repressive nature of this trial. Once again, the world sees Russia differently than the way Putin tries to present it at his daily international meetings. Clearly, none of the steps Putin promised to take toward instituting the rule of law has been taken. And his statement that this court will be objective and hand down a fair verdict is yet another deception of the entire country and the international community. That is all. Thank you.