This story makes my stomach turn.

We now have retroactive ROE for enlisted operators so that lawyers can parse chaotic firefights second by second against ex post facto political requirements of our corrupt and useless lotus-eating client, Hamid Karzai. Read Kanani Fong’s post and ask yourself how a vehicle that was deemed a threat in eyes of prosecutors can only have non-threatening occupants who approach American GIs in the midst of combat? WTF?

The initial investigation which blamed “failures of leadership” in the tragic death of Dr. Aqilah Hikmat has been swept under the rug by Army prosecutors.

The senior generals  of the US Army are failing in their moral obligation to stand behind our soldiers when they are right and to demonstrate that when they are wrong, that the standards that apply to the least of privates apply equally to the most august of commanding officers:

A few weeks ago, over on Facebook, I shared the tragic story of the accidental death of a female Afghan gynecologist. She had stepped into a battle, where a convoy had not only been bombed, but were engaged in a firefight. I remember scratching my head, thinking about the scores of women who needed her skills, and now they wouldn’t have them. Everyone on Facebook agreed. We were all saddened and troubled.
But I also recall thinking that in her snap decision, she underestimated the situation, the danger, and her own mortality. Had she not rushed into the middle of things, she would be alive today. Sometimes you cannot save the world, only yourself and the ones you love.
War in itself is messed up. War and politics even more so. The president of that creaky nation called for an investigation.
Now, Army prosecutors are bringing charges of negligent homicide against SFC Taylor.
His Facebook support page is here: In  Support of SFC Walter Taylor
Since he’s hired a civilian military defense attorney, a fund has been set up because it’s already wiped out his life savings. Please go here: On Indiegogo: Defense Fund for SFC Walter Taylor 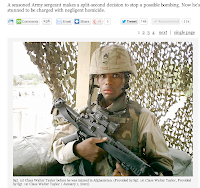 Then keep reading. From the L.A. Times:

“Four Seconds in Afghanistan: Was it combat or a crime?

Imagine your head has just been rocked by the concussive force of high explosive, bullets are snapping around you and the air is thick with the cries of wounded friends. You don’t know where are the enemy is. No officer is giving you orders. You can’t hear properly. Your heart is pounding in your chest. All of you may die in the next few minutes. A black car pulls up and everyone sprays it with bullets. Someone gets out and walks at you….what do you do?

You had far more time reading that passage than SFC Taylor had to make the decision for which he is on trial for his freedom.

Peter J. Munson –Rajiv Chandrasekaran on Afghanistan, COIN, and the Future of the MAGTF

RC:  I believe that we could have fought this war in a far smarter way.  Fighting smarter does not have to involve an existential threat.  If the President of the United States and his war cabinet determine that committing US troops and US civilians and American taxpayer money was a critical thing to do for our national security, then I believe the organs of our government had an obligation to employ those resources in the most judicious way possible.  You outline a number of problems that I illustrate in the book.  Each of the problems you cite has a different cause.  Let me take a few of them.
The Marine decision to push for contiguous battlespace – let me say at the outset that this book is not in any way a criticism of the Marines who went to Afghanistan and fought so bravely.  They did phenomenal work and I try to capture that in the opening chapters of this book.  I recently found out that the 2nd Marine Expeditionary Brigade is going to be awarded the Presidential Unit Citation, an incredibly prestigious award. I think that a reader would determine from their work that I detail in the book that they were deserving of an honor like this.  My criticism is with senior officers in the Corps in Washington, as well as our senior Pentagon leadership for sending the Marines where they were sent.  There is no argument that Helmand is a bad place; lots of insurgents there.  Helmand is the epicenter of poppy production.  It was a nasty place, but was it the nastiest place in all of Afghanistan?  Was it the most critical place?

The Glittering Eye –Education As the Key to a Bright Future, Again
Dave is right. The problem of an advanced economy with rentier policies is that economic stagnation is the natural byproduct of managing markets for the benefit of a politically connected oligarchy:

….I see that others are beginning to recognize the point that I made several years ago, that if you want more scientists you need to produce more jobs for scientists:

Obama has made science education a priority, launching a White House science fair to get young people interested in the field.

But it’s questionable whether those youths will be able to find work when they get a PhD. Although jobs in some high-tech areas, especially computer and petroleum engineering, seem to be booming, the market is much tighter for lab-bound scientists — those seeking new discoveries in biology, chemistry and medicine.

The smartest math PhD I know is working at, essentially, the same job as he held before he got his doctorate, working as a computer programmer. Outside of a handful of fields, e.g. petroleum engineer—a field that produces fewer than 300 new graduates with bachelors annually from just a handful of programs nationally, or biomed, enormously subsidized, there just aren’t a lot of jobs out there. Even biomed is shrinking:

CTOVision.com (Alex Olesker)-Tech at the Tip of the Spear
I think they used to call some of this “network-centric” in the old days:  🙂

….though most don’t associate computer networks with special operations forces, SOCOM is seeking technology for cyberspace operations. It is looking information assurance throughout worldwide enterprise systems that also connect to joint, coalition, and partner networks. SOCOM is also interested in offensive and counter-threat capabilities, wanting to globally identify, attribute, geo-locate, monitor, interdict, and defend against threats while simultaneously being able to access, control, and disrupt enemy networks.

Chet Richards -Be agile and win
Agility can negate strength
Techcrunch –How Pebble And Other Product Phenomenons Killed It On Kickstarter
Kickstarter is good.
Michigan War Studies Review – (Walter G. Moss) Kiev 1941: Hitler’s Battle for Supremacy in the East and (Bradley Nichols) Anthropology at War: World War I and the Science of Race in Germany
Germany shaped the twentieth century to a greater degree than we give it credit, largely because it was almost always for the worse.
Volokh Conspiracy –Making Sense of Chief Justice Roberts’ Opinion and The Supreme Court Leaks Continue
Venkat Rao – Not Important, Not Urgent
Abu Muqawama – (Exum) Special Abu Muqawama Q&A with Matt Zeller and (Elkus) Paul Van Riper on Strategic Thinking and Operational Art
That’s it.