The best guide to the chaos of Egyptian politics is Hobbes. No, not
Thomas Hobbes — Calvin and Hobbes. Analysts have been arguing since
the revolution over whether to call what followed a transition to
democracy, a soft coup, an uprising, or something else entirely. But
over the last week it’s become clear that Egyptians are in fact caught up in one great game
of Calvinball.

For those who don’t remember Bill Watterson’s game theory masterpiece, Calvinball
is a game defined by the absence of rules — or, rather, that the rules
are made up as they go along. Calvinball sometimes resembles
recognizable games such as football, but is quickly revealed to be
something else entirely. The rules change in mid-play, as do the goals
("When I learned you were a spy, I switched goals. This is your goal and mine’s hidden."), the identities of the players ("I’m actually a badminton player disguised as a double-agent football player!") and the nature of the competition ("I want you to cross my goal. The points will go to your team, which is really my
team!"). The only permanent rule is that the game is never played the
same way twice. Is there any better analogy for Egypt’s current state of
play?[[BREAK]]

Then, in the midst of the presidential election, the SCAF unilaterally issued a constitutional amendment annex greatly expanding its own power and limiting that of the incoming president. Whoever wins, the powers of the presidency have been radically
constrained, while the SCAF has granted itself legislative power (!) and
more or less total immunity from any civilian oversight. This rather strips the promised transfer of power to civilian rule of its significance, while falling far short of establishing a legitimate, consensus set of rules of the road for Egyptian politics. Small wonder everyone quickly labeled it a coup, soft or otherwise. But then, in a defensive press conference today, SCAF representatives defended their democratic commitments with explanations which seemed to contradict the text of their own constitutional amendment annex.

Then, just as the fix seemed in for the old regime’s candidate, Ahmed Shafiq, the campaign of his Muslim Brotherhood rival Mohamed Morsi claimed a smashing victory based on the tallies of its observers in all Egyptian voting booths. But the Shafiq campaign disagrees, and official results may not be announced until Thursday, leaving plenty of time for this to change. The interpretation of the constitutional annex — by the SCAF, by the judiciary, and by all political trends — will likely change depending on the outcome of the election. In the next few days, a parliament might or might not seat itself, the new president might or might not be empowered, a new constitutional assembly might or might not be formed. And tomorrow, another of Egypt’s endlessly inventive judges may declare the Muslim Brotherhood itself illegal. 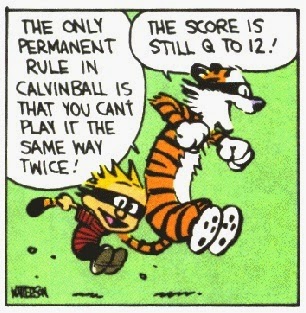 But here’s the thing — Calvin doesn’t always win at Calvinball. Players succeed by responding quickly and creatively to the constantly changing conditions. Hobbes plays brilliantly, as one might expect. But even Rosalyn, the dread babysitter, figures out the rules lurking within the absence of rules and has Calvin running from water balloons before he knows it.

In other words, Watterson’s game theoretic analysis suggests that
Calvinball’s absence of rules does not automatically bestow victory on
Calvin. The game is going to continue for a long time, at least until the players finally settle on some more stable rules which command general legitimacy. Perhaps the SCAF might not automatically dominate SCAFball?

And with that, it’s back to scanning all available news sources for the latest twists and turns in Egypt’s high stakes game of Calvinball. Who says game theory isn’t relevant to real world politics?

Note:  all images courtesy of dedicated Calvin and Hobbes fans, and all rights reserved to the legendary Bill Watterson.