Seeing the Syrian Conflict through Narrative

Unlike the protests of the Arab Spring in Tunisia and Egypt, the campaigns underway against the Assad regime in Syria have a distinctly sectarian character. The Assad regime is dominated by the Alawites, a little-known esoteric Shi‘ite sect. However, the majority of Syria’s population is Sunni Muslim (approx. 75%). And caught in the middle of the conflict are Syria’s Christians (10% of the pop.), Druze, Twelver Shi‘ites, and others, including a small number of Jews. In July of 2011 alone, at least 30 people were killed in violent clashes between pro-regime Alawites and anti-regime Sunnis in the city of Homs.

Conflict between the two religious communities is nothing new. During the reign of Hafez Assad (d. 2000), the Alawite regime perpetrated an infamous massacre of Sunni Muslims in the city of Hama, just north of Homs, that claimed between ten thousand to forty thousand lives. And back during the reign of the Sunni Ottoman Empire in Syria, Alawites were not recognized as Muslims or People of the Book, but rather as heretics with no legal status. The history of conflict and tense relations between the Alawites and Sunnis in Syria is obviously long and complex. Yet, these complexities aside, the sectarian dimension of the Syrian conflict reveals much about the significance and power of narrative. 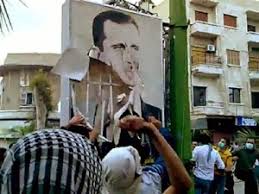 For those interested in politics, democratization, and international relations, looking at the role of narrative in the Syrian uprising is particularly informative. Indeed, by framing the conflict in Syria in sectarian terms (as I did above), we see the belligerents through their religious affiliations and the differences that exist between them and little else. The Alawites have different doctrines, rituals, practices, institutions, and so on, than do the Sunni Muslims. The variety of differences in the area of religion can be distracting and misleading though.

These differences, and the broader implications they have had, are actually all symptoms of a conflict of narratives, albeit profoundly shaped by the accidents and currents of world history. Without narrative, all of the doctrines, rituals, or institutions would be nothing beyond what is observed by a person that does not know the narratives involved, and they would carry no substantive meaning or significance. For example, without narrative, the act of wudhu or ritual ablutions by a Sunni Muslim becomes simply a hygienic act of washing.

To illustrate the conflicting narratives that exist between the Sunnis and the Alawites, I have radically paraphrased and structurally simplified the core underlying narratives at play in both sects.

Sunni Muslims: The One Deity revealed His Will to His Final Prophet and humanity must follow that revealed knowledge to select wise leaders, create a just and righteous society, and earn salvation after death in Heaven through steadfast effort and intention.

[Note: Alawites historically practice taqiyya and avoid exposing their beliefs and practices to outsiders, thus scholars debate the actual tenants of the Alawites]

These serve as starting points for notions of identity, institutions, worldviews, and customs. Due to the particularly insular nature of the Alawite narrative,  and the Sunni rejection of them as fellow Muslims, the Alawites have existed as a minority in Syria (indeed, a more precarious minority than Christians, who are at least “People of the Book” as an Abrahamic pre-Islamic religion) and the Alawites have acted in ways  that support their interests, such as serving the French colonialists or supporting Baathism and crushing Sunni Islamism.

Religion, at its most skeletal level, is narrative. More specifically, I mean to say (tipping my hat to Bruce Lincoln) that “religion,” at its core, is a particular, communally-shared narrative (or narratives) attributed to a transcendent source (e.g. deity, ancestor, totem etc). This makes these particular narratives qualitatively different than those attributed to a mundane human author or folk culture (where anonymity may rule the day). Practices, community and institutions all start and take shape from there. Due to this exceptional attribution (“Allah revealed these stories to our leader on the mountain”), the narrative(s), and the beliefs or rituals or institutions that the narrative(s) supports, carries transcendent authority.

These two qualities distinguish religion, or (for the sake of convenience) a “religious narrative,” from all other narratives. This is one of the principal reasons why older religions, such as Judaism or Christianity, are privileged in our society over younger religions, such as Mormonism (LDS). The narratives of the older religions are protected by the ambiguities and gaps of the past, lost in history (as well as longstanding communities and institutions), and the rhetorical tricks that these obscurities of the past have allowed contemporary adherents and institutions to enjoy. But how does this business of religion and narrative relate to Syria?

When we look at the conflict between the Alawites and the Sunnis in Syria through the lens of narrative , we can see people following different or conflicting narratives. There is no empirical verifiable evidence to support the religious claims of either group (or any other religious sect for that matter); there are only the narratives (and that is what matters) that they tell to relate a certain depiction of the past, explain the origin and meaning of their communal identity, or rituals, or extol the authority of their texts and traditions and the ongoing authority of those texts and traditions in the 21st century, et cetera. The rival conceptions of authority and identity that the Alawites and Sunnis profess put them at odds with each other and delineate them as two factions, consisting of individual human beings, engaged in hostilities throughout the years.

When we see the conflict through the lens of narrative, we can also see certain solutions. Namely, a narrative lens suggests that the key to a vibrant democratic-nationalist society in Syria, where citizenship displaces sect, is the formation and adoption of a resonant narrative that offers an alternative reference point for the formation of Syrian identity. As an example of one such successful narrative, one that has largely displaced religious (or sectarian) or ethnic narratives and fostered a democratic society, we can look to the United States of America. That said, the success of that narrative (as we know) in the United States has not been a simple or bloodless process at all, nor will that process be so in Syria (nor should we expect it to be). It is, however, an effort worth supporting.