Democracy, God, the People, and the Pharaoh: A Master Narrative’s Work is Never Done 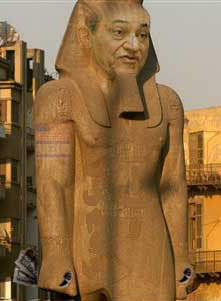 The Jasmine Revolution in Tunisia last week beget further democracy uprisings in Egypt and Yemen this week, as well as protests in Jordan and Mauritania.  If the protesters are finally successful in Egypt and President Hosni Mubarak is forced out, this eruption of game-changing scenarios inspired by deep conflicts between the people and their leaders, and enabled by the velocity and spread of social media, poses a whole new set of communication and policy challenges for the United States.

For most Americans these developments are news items that we watch until we tire of the images on the screen and turn the channel or click onto another website or decide to check our email or post a change to our Facebook status.  I doubt many of us could locate Tunisia on a world map.  I know most of my students can’t.  But beneath that surface of relatively uninformed curiosity about the unfolding rebellion lies a deeper empty well of cultural ignorance.  Put simply, most of us couldn’t say why, or how, the words “Pharaoh” and “tyrant” used to describe Mubarak are such powerful narrative IEDs dropped into an already turbulent environment.

Here’s a brief version of the backstory, which you can read more about in a new book, Master Narratives of Islamist Extremism, to be released next week.  (Full disclosure: I am one of the authors.)  The Pharaoh, a tyrant believed by many Muslims to be Ramses II, rejected the Word of God despite being repeatedly being shown signs through Moses who was acting as God’s agent, was drowned in the sea with his army while pursuing the Israelites.  Just before death, the Pharaoh accepted the God of Moses but it was too late.  God did not save him.  Instead, God promised to preserve the tyrant’s body for all time, so all could see what fate awaited those who reject God’s signs.  The body of Ramses II is, in fact, remarkably well preserved and on display in Cairo today.

That is where the Old Testament/Qur’anic story ends, but it is not the end of the story.  Master narratives derive their enduring cultural power over time and across geographies.  So it was that the story of the Pharaoh was used to discredit Egyptian President Anwar Sadat and to cast him as a tyrant.  As we recount it in the book:

On October 6, 1981, President Anwar Sadat was reviewing a military parade commemorating Egypt’s ‘victorious’ campaign in the 1973 Yom Kippur War.  While television cameras captured the event, four men emerged from a truck and approached the viewing stand. When Lieutenant Khalid al-Islambouli, the leader of the assassination plot finished firing his weapon at Sadat, he cried out: “I have killed the Pharaoh!” Sadat was shot thirty-seven times. Thereafter, videotapes of the bloody televised spectacle fetched huge prices on the black market and it remains readily accessible online today.

Similar tyrant/Pharaoh accounts and images exist on the Internet and are distributed in pamphlet form for other perceived tyrants, including Ariel Sharon, George W. Bush, and Barack Obama.  In each case, the master narrative is appropriated as a sign of history repeating itself and used to influence perceptions of the targeted leader/ruler.  It doesn’t matter that there may be no direct correlation between the Pharaoh, who was not an elected official, and today’s leaders.  Nor does it matter that thus far no Moses has appeared before the cameras to claim he or she is acting as God’s agent.  What does matter is that once a leader is branded a “tyrant” and called “the Pharaoh,” the details of the old story matters less than the idea that an injustice of historic proportions exists and must be remedied by true believers.

For those of you who may be thinking, “but this democracy uprising has nothing to do with radical Islam or even with religion in general,” that fact doesn’t make the interplay of a powerful set of rhetorical figures well known within and across cultures any less viable.  If anything, it only broadens the appeal.  For it is not just Muslims who are in the streets of Cairo or Tunis, but a diverse array of Arabs, Muslims, Christians, and Jews, who all know the old story of the tyrant known as “the Pharaoh” who dared to challenge the God of Moses.

In the case of Egyptian dictator Mubarak the comparison is made more relevant by his refusal to yield to the will of his people.  And it is underscored by his friendship with U.S. leaders and our continuing support of his regime.  Regardless of religion, the overt support of the U.S. is often associated with the use of our military and economic power to influence events and protect our interests in the region.  The irony, of course, is that while we officially endorse democracy everywhere in the world, this democratic uprising places our official position in conflict with the support of a major ally in the region.  Do we side with the people who are organizing for democracy, or with a stubborn dictator well past his sell-by date who has been tarnished with the tyrant label?

As Reuters reporter Amr Abdallah Dalsh on the scene in Cairo put it yesterday:

The Administration is caught in a bind, but it’s more strategic than just moral: Supporting tyrants loathed by their own people but willing to do Washington’s bidding in international matters is a decades-old U.S. tradition in the Middle East, as well as in Asia, Africa and Latin America. The problem with Mubarak is not simply that his methods are at odds with professed U.S. values; it’s that his brittle autocracy appears to have entered a period of terminal decline, with the U.S. potentially on the wrong side of history.

Being “on the wrong side of history” is a narrative we can little afford.  Yet no matter what we may or may not do in response to this and other popular uprisings, the perceived lack of U. S. support for the protesters and continuing support for Mubarak does evoke another historical parallel.  Aladdin Elaasar is the author of The Last Pharaoh: Mubarak and the Uncertain Future of Egypt in the Obama Age, and in a op-ed piece published today, he writes ominously of Egypt’s uncertain future:

It is possible to find parallels in Egypt to pre-revolutionary Iran. Given the social ills engendered by extended unemployment, especially among the qualified young; aggravated social polarization in which ill-gained wealth, insolently displayed, stood out against the growing misery of the rural and urban population; and generalized corruption spreading right up to the highest levels of society and state. Indeed, many U.S. analysts acknowledge Egypt’s instability. “It will rock the world,” wrote Michele Dunne, a Carnegie Endowment for International Peace scholar. “Octogenarian Mubarak, will leave office, either by his own decision or that of providence.” Instability in Egypt may become an international security concern. There is no clear chain of command or civil society base to facilitate the transfer of power to the next president.

Does the reference to “providence” call up the association of divine will bringing an end to the rule of a tyrant? Perhaps.  But dictators rarely die peacefully in their sleep.

The irony of the U.S. response is not lost on the rest of the world.  As Richard Grenell, Spokesperson for the United Nations, put it in an article earlier today:

[Vice President] Biden’s support for Mubarak in the face of his falling regime sends a powerful and unfortunate message to the Arab world that their freedoms are negotiable. While American interests in the Middle East must obviously be protected, America’s credibility to support democracy for everyone everywhere is crucial. WikiLeaks have already shown American ambassadors and foreign service officers criticizing governments privately but publicly saying very little. How can VP Biden ever talk about the importance of fighting for freedom and democracy again if he chooses to support a corrupt dictatorship at the very time its being so strongly challenged from within? The vice president’s absolute show of support for Mubarak is unfortunately being heard throughout the Arab world. The people of Lebanon, Iran, Syria, Cuba and North Korea are listening. It’s too bad that Vice President Biden can’t find a way to support everyday Egyptians’ pleadings for more freedoms.

Finally, with the master narrative in the backstory and the label of tyrant firmly in the foreground of published reports used to describe Mubarak, there can be no doubt about the message of the looters who broke into the Egyptian Museum last night and “destroyed” two Pharaonic mummies.

Democracy has proven to be a many-splintered thing in the Middle East and elsewhere, whether it arrives with an invasion that forces a regime change or by the will of angry mobs who threaten to topple a dictator. Regardless of method, the U.S. should pay greater attention to the language used to define the conflict and what the meaning of terms such as “Crusader,” “tyrant,” and “Pharaoh” conjure up for populations who are schooled to respect their histories.  The use of the Internet, Facebook, and Twitter, is not the reason the people have taken to the streets.  These devices are only distributors—and effective ones—of messages that are deeply rooted in culture and time.  What moves people to action is not the technology of rebellion, but the narrative that shapes it and the words used to define it.  Master narratives are powerful because they provide answers to essential questions of identity as well as what it takes to live a just and meaningful life.  As such, they serve as calls to action.  Because, to paraphrase the philosopher Alistair MacIntyre, in order to answer the question “what am I to do?” requires first being able to explain what narratives we are part of.

The Pharaoh is a master narrative throughout the region and most of the world.  We would do well to remember that when we begin formulating what our next move will be.